Feeling the sting of karma with The Sims 3 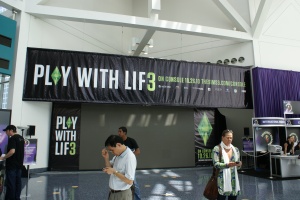 The decade-long running franchise of The Sims has survived the tests of time through its consistent release of expansion packs, a sequel and even more subsequent expansion packs, keeping the life simulator relevant through the years.

With The Sims 3 coming to consoles this Fall, the established formula of controlling lives is still intact, but with a venture out into the persistent open world of the neighborhood.

The Sims 3 sim creation keeps many of the same staples of its predecessors, but tosses in some new features and refinements. One new feature is the addition of traits. Based on traits like “fun-loving” or “doesn’t get art”, sims are able to connect or distance themselves with other sims in their neighborhood, creating a more social element to the series.

Along with the social aspect of the game, the creative online community can share any of their creations through the Sims Marketplace. Custom clothing, items, houses and sims can be easily shared across Xbox Live or the Playstation Network. Players can also import any of their friends’ sims into their game to further expand the social nature of the game.

In contrast to its predecessors, The Sims 3 takes place in an open world, seamlessly going from neighborhood to the city while seeing every sims lives unfold in different ways. The guided demo transitioned from the big picture of an expansive neighborhood to the intimate interactions between sims in order to demonstrate the new karma feature.

Focusing on a typical sims party house, two contrasting sim housemates, Hunter and Michael, were the prime example of what karma can do. Hunter is the more laid back and timid type whereas his housemate Michael is the party animal and social butterfly. In this party situation, Hunter is shown as the introvert and bothered by his house being trashed and his crush being hit on by Michael. With the help of karma points accumulated through different challenges in the game like reading a book or going to work or gaining points at midnight, known as the hour of reckoning, the player can activate a karma event, where in this situation, Hunter is hit with a super positive boost to all of his traits, giving him the courage to join the party and meet his crush. As a contrast, Michael is hit with a negative karma event, pushing all his traits to a low and making him the most unpopular person at the party.

With just these small events, the story of a sim can change dramatically, becoming ever closer to the spontaneity of real life. The Sims 3 is to release on September 26, 2010.

What I'm trying to do most is trying to do something. It's these short lines of writing that describe me most. Concise but maybe, in a way, poignant.
View all posts by Kenny Redublo →
This entry was posted in Published, StudentVoice and tagged e3-2010, studentvoice, videogames. Bookmark the permalink.